Are you on the hunt for the best Honolulu museums to add to your itinerary?

This guide covers some of the top museums in Honolulu… from cultural museums to religious ones and, of course, military museums.

Are you planning your trip to Honolulu last minute?

If you’re traveling to Honolulu last minute, you want to ensure you have lodging/tours ahead of time! Below are some of our top picks on Oahu!

Best Tours and Activities on Oahu:

Best Hotels and Lodging in Honolulu:

These museums are some of the top sights to visit in Honolulu, particularly on a rainy day or if you just feel like staying in Honolulu for some duration throughout your trip.

Did we miss any fantastic museums in Honolulu (or nearby)? Let us know in the comments. Thanks!

One of the best museums in Honolulu that you can’t leave the city without visiting is the Iolani Palace.

It was built as the royal home for the rules of the Kingdom of Hawaii that started with Kamehameha III and ended with Queen Lili’uokalani.

The palace was built by King Kalakaua who wanted to be buried here, but he died before it was completed. It’s now a museum where you can see how royalty lived in this beautiful house.

Today, you can walk through the first and second floors which have been renovated and are open to the public (with a guided tour).

On the first floor, you will see the Grand Hall, State Dining Room, Blue Room, and the Throne Room.

On the second floor, you will find private areas such as the King’s and Queen’s suites, the Music Room, and the Imprisonment Room.

The Imprisonment Room holds great significance as it is where Queen Liliuokalani was put on house arrest for 8 months after her government was overthrown.

Most are marveled by the presence of this Islamic Museum and cultural center in the islands, however, it undeniably brings its unique touch, making it a special place.

The Shangri La estate was built by the heiress in the 1930s. Home to the American Heiress Doris Duke who hails from New York. The museum’s collection houses pieces that were collected over a 60-year period.

Fountains, a playhouse, stunning mosaics, tiles, and luxurious spaces are just some of the things you will find here. It is no wonder it is considered to be an inspirational goldmine for interior design and architecture enthusiasts!

This outdoor museum preserves the rich history of those who migrated to Hawaii from other parts of the world as workers on Hawaii’s sugar cane plantations.

Sugar cane plantations in Hawaii changed the entire culture and landscape of the state which thrived from the work of immigrants. The recreated village shows how immigrant workers lived in the early 20th-century.

Hawaii’s Plantation Village features antiques, as well as replicated and restored buildings of some of the ethnic groups including a community bathhouse, a barbershop, a medical clinic, photographs, documents, and even a shrine.

Located on the University of Hawaii campus at Mānoa, the John Young Museum of Art contains a diverse art collection from Africa, Southern Asia, Asia, the Pacific Islands, and South America.

The majority of the displayed pieces were donated by the Hawaiian-American artist John Chin Young who the museum is named after.

The museum is made up of two galleries, an Asian art gallery, and a tribal art gallery. Pieces in the museum are representative of the history of the different cultures.

Some of the works include a ceramic kendi from the early Ming Dynasty and Neolithic pottery jars from 3000–2000 B.C.E.

The U.S. Army Museum of Hawaii

The U.S. Army Museum of Hawaii is located in Battery Randolph, a former weapons battery located at the Fort DeRussy Military Reservation.

The grounds became a museum in 1976 and preserve the history of the Hawaiian military especially from World War I to the Vietnam period.

The exhibits have audio and visual effects that showcase what the soldiers experienced in battle. Artifacts in the museum include weapons and military paraphernalia.

There is also a gift shop for visitors at the Honolulu museum.

Visitors to the museum can learn about Hawaii’s contribution to events at Pearl Harbor, Vietnam, and Korea.

Situated on Fort Island, The Pacific Aviation Museum is home to two preserved seaplane hangars from World War II and is one of Honolulu’s original aviation fields.

Aircraft including the Mitsubishi A6M2 and a Japanese Zero fighter, which are famously known from the Doolittle Raid after the Pearl Harbor attack are some of those preserved in the museum.

Also in the museum is a combat flight simulator for visitors to enjoy. The museum is located on an active base, so guests should expect serious security protocols.

One of the best Honolulu museums to visit in order to understand the Japanese heritage on the island is the Japanese Cultural Center of Hawai’i.

This non-profit organization is a cultural center that is brimming with Japanese history and many cultural exhibits… including a souvenir shop, teahouse, and martial arts memorabilia.

There are many interactive displays and activities going on there at all times and it is a great place to visit to understand the history better.

Some of the exhibits and places to visit inside are the Okage Sama De Exhibit, the Tokioka Heritage Resource Center, the Honouliuli Education Center, the JCCH Ballroom, Seikoan Tea House, and Kenshikan Dojo (promotes kendo and martial arts).

The center is closed Sundays through Tuesdays and is open from Wednesday until Saturday from 9am until 1pm.

The Mission Houses Museum is a building complex commemorating Christian Missionaries on the islands and their influence.

The museum features original structures dating back to the early 19th century during the time New England settlers came to the island to spread the Gospel.

The buildings preserve what western life looked like on the island in earlier times. Some of the buildings visitors will find here include a printing house, a storehouse, a frame home, and a coral-stone home.

Visitors can enjoy guided tours, as well as visit the gift shop and library.

Known for being one of the most comprehensive museums in America, the Honolulu Academy of Arts is home to Asian, Pacific, African, Japanese, and Western art.

Some of which include Japanese woodblock prints and Italian Renaissance paintings. The museum is representative of Hawaii’s rich and diverse cultures.

The museum hosts temporary and permanent exhibits and features a café, a theatre and visitors can even take art classes in the studio.

Admission to the museum costs $10 for adults and is free for children ages 12 and below.

The museum is today one of the foremost exhibition sites that documents the broad variety of culture and history of the locals.

Some of the pieces in the museum include anthropological as well as archaeological relics.

The museum also has a planetarium which visitors are sure to enjoy. The standard admission fee for adults is $22.95.

It was named after the Bowfin fish. The submarine has been exhibited in the museum since 1981 and visitors can access the passageways and rooms within the vessel.

A war memorial commemorating over 3500 servicemen along with other artifacts commemorating the submarine are also found in the park and museum.

Visitors will find posters, photos, models, missile displays, a gift shop, and a food kiosk within the museum and park grounds. The standard admission fee for adults is $10.

What are your favorite Honolulu museums? Let us know the best museums in Honolulu in the comments. Thanks!

Pin this Museums in Honolulu Guide 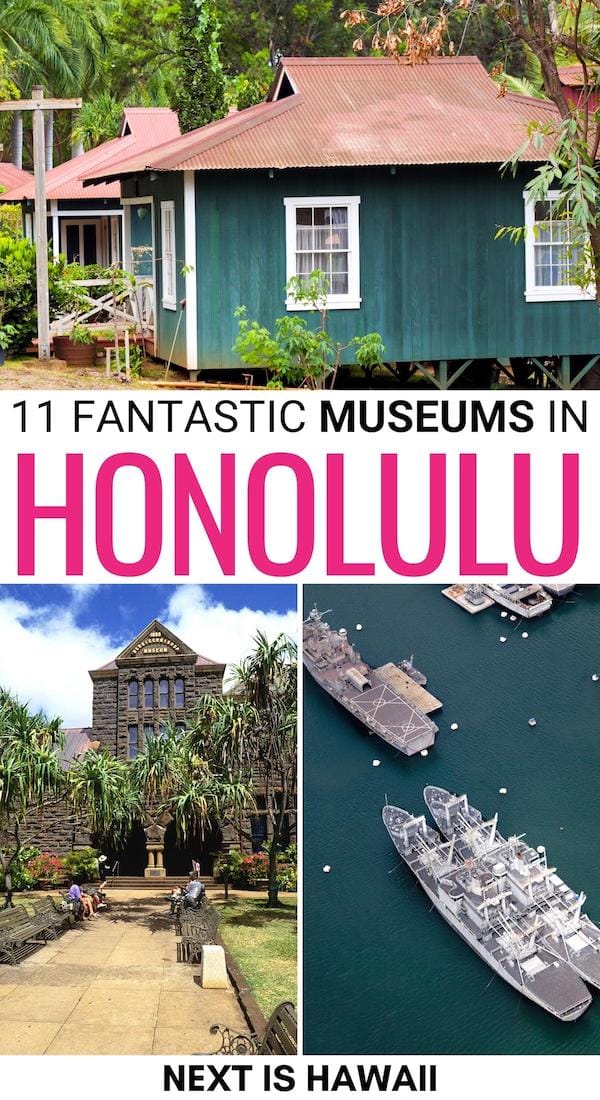 2 thoughts on “11 Best Honolulu Museums (that are Perfect for a Rainy Day!)”